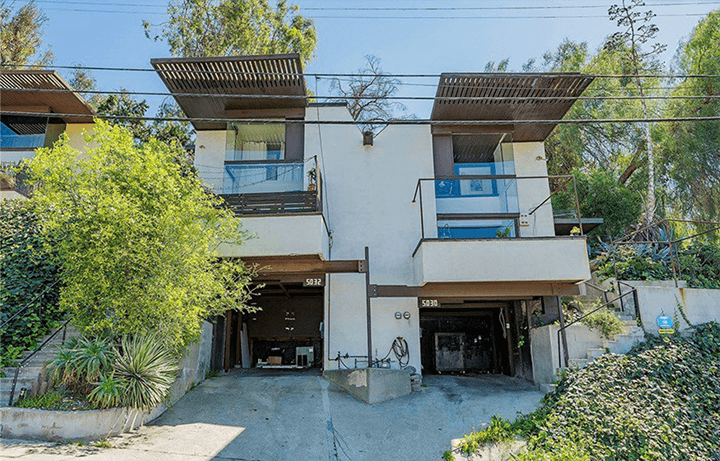 While most modernist architects favored simple boxes, Allyn E. Morris “was the king of the cantilever. The architect craved the horizontal line and seemingly tried to stretch it to infinity – most evident in his 1961 Aldama Apartments in Highland Park.”

Sited on a hillside parcel, the commanding 2-story dwelling showcases Morris’ signature design feature. The roughly 800-square-foot unit offers two bedrooms, one bath with skylights, a double-height living room with large expanses of sliding glass leading out to a balcony, hardwood floors, and a large backyard with mature trees.

Morris, an engineer turned architect, worked alongside “Frank Lloyd Wright, Calvin Straub, and Lloyd Wright, and was particularly enamored of R. M. Schindler’s free-flowing designs.” Schindler was such an influence in his work An Architectural Guidebook of Los Angeles says the apartments “Evoke the spirit of Schindler’s apartment houses of the 1920s and 1930s.”

The apartments are among a collection of mid-century gems Morris left us that includes his studio and residence, Morris Studio in Silver Lake, Lago Vista condos in Echo Park, and the insanely stunning Bubeck Residence in Glassell Park.