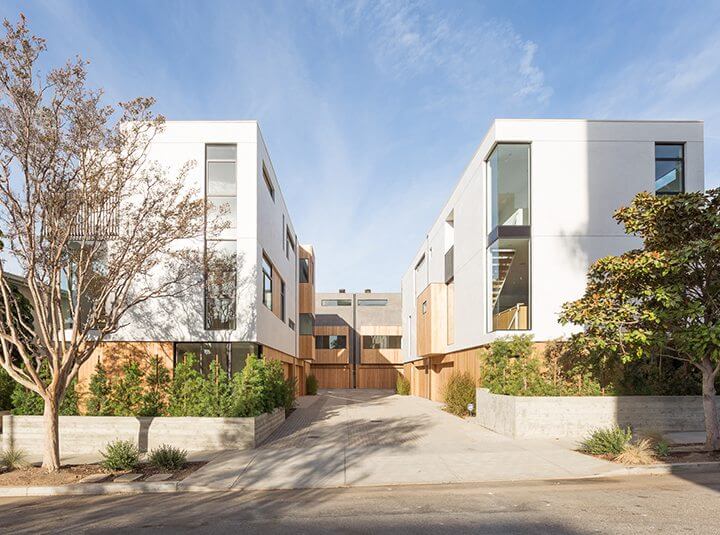 This was an excellent year for exceptional architecture for sale in Los Angeles. I saw everything from a small lot development surpassing architectural expectations, an expanded and restored mid-century by Neutra, to an old-world Hollywood estate sited on sprawling grounds, filled with period details and glamour reminiscent of the Great Gatsby era. Here’s a roundup of 2017’s top 10.

1. Habitat 6
I had the pleasure of representing developer Elan Mordoch in the sale of Habitat 6. He teamed up with Rios Clementi Hale Studios to build a collection of modernist homes utilizing the small lot ordinance. The results surpassed expectations.

2. Designer Cliff Fong’s Studio
Cliff Fong is a Los Angeles-based interior designer with an A-list clientele that includes Ellen DeGeneres, the co-owner of Galerie Half and the former owner of the most exquisite pied-à-terre in Los Angeles.

3. Mary and Lee Blair Residence and Studio
Architect Harwell Hamilton Harris worked for Richard Neutra and Rudolf Schindler before branching out on his own in 1933. He designed this home and studio for Disneyland artist Mary Blair, an animator and concept artist for Disneyland’s “It’s a Small World” attraction.

5. The Shaarman House by Richard Neutra
Built on a flat ridge top measuring almost an acre, the home offers the ultimate privacy setting. It features classic modernist details, including walls of glass, wood floors and ceilings, a stone fireplace, numerous custom built-ins, a large swimming pool, and a separate one-bedroom guest house located on the opposite side of the property.

6. Cecil B. DeMille Estate
This is the stuff old Hollywood glamour is made of. Located in Laughlin Park, the former Beaux-Arts-style mansion, pool house, and studio of famed Hollywood director Cecil B. DeMille gives you a glimpse of living a prosperous life in a bygone era. Angelina Jolie now owns it.

7. Home of artist Pauline Annon
The artist lived in one of Silver Lake’s most remarkable homes. Offered for sale needing substantial work, a developer picked it up and restored the original period details, including a rarely seen brick facade, original steel casement windows, and a beautifully detailed iron balustrade leading to the second floor.

8. The Myra House
This Kinfolk-inspired Spanish residence in the Franklin Hills is the vision of the interior designer Gordana Golubovic. The space seamlessly blends simple and modern details throughout, making this home a place where the art of slow living can truly be enjoyed.

9. Anna Pomerantz’s mid-century home
Props to the former Director of Residential Interiors at Commune Design for giving this home a flow that lends itself to entertaining, easy living and making this space feel like a sanctuary in the middle of the city.

10. The Hammerman House by Richard Neutra
Originally built as a single-story residence circa 1954, the home was thoughtfully restored and expanded by architect John Bertram. While it’s rare to ever improve upon the work of the architect considered one of the founders of California Modernism, Bertram does it – brilliantly.

Subscribe here to keep tabs on noteworthy architecture for sale in Los Angeles in 2018.