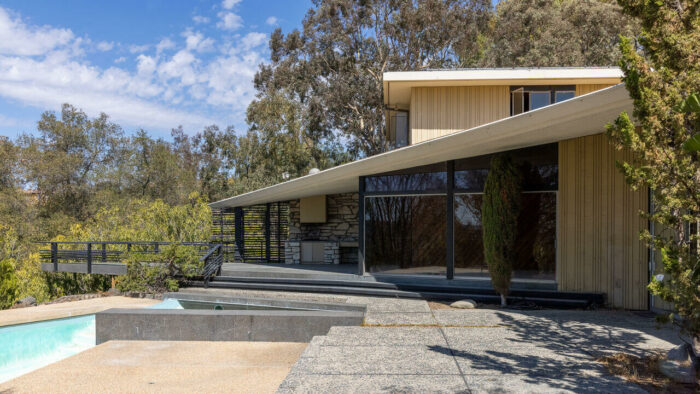 The former Charlton Heston Estate sits gutted on a 2.9-acre promontory in Beverly Hills, looking for a buyer to jump at the rare chance to restore it to its former mid-century stature.

After starring in the hit “Ben-Hur,” Heston hired noted modernist architect William S. Beckett to design a 5,100-square-foot residence with angular rooflines and views from almost every room.

Heston lived in the home until he died in 2008. Variety writes the house had “glass-walled living and dining rooms divided by a marble bar, double-height library, and small office thrillingly cantilevered over the steep hillside during his residency. The four bedrooms in the main house include a staff suite, two guest bedrooms with attached bathrooms, and a master domain composed of private study, fireplace, dual bathrooms, and walk-in closets. The back of the main house opens to an entertainment terrace with swimming pool; a separate, elevator-equipped three-story structure that abuts the estate’s tennis court contains another guest or staff suite, screening room, and multilevel art studio with double-height ceilings.”

There are massive wrap-around viewing decks and terraces, along with private access to Franklin Canyon trails.

For the Heston family, WSJ reports, “Deciding to sell the house was ‘a difficult decision,’ said Fraser Heston, a filmmaker who as a baby played the infant Moses in The Ten Commandments.”

He gutted the house, planning to almost triple its size, but his plan was never realized. He listed the rare multi-structured compound located at 2859 Coldwater Canyon Dr for $14,900,000 in early 2020. Following two price reductions, the asking price is now $11,700,000.