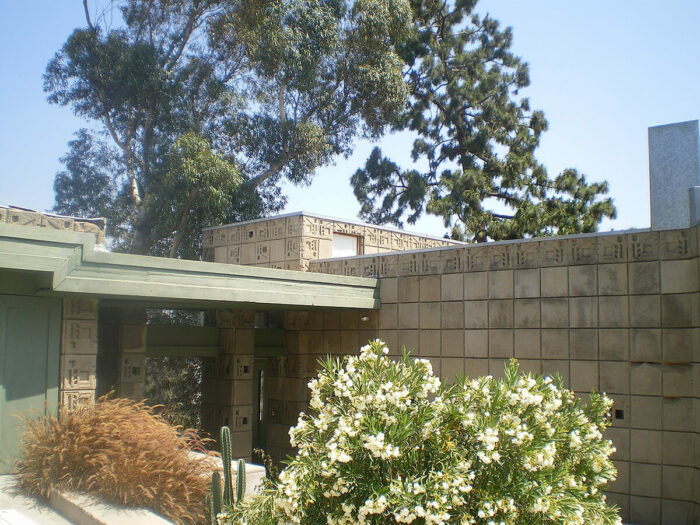 Frank Lloyd Wright’s curiosity about a material he once considered the cheapest and ugliest thing in the building world led to four spectacular concrete textile-block residences in Los Angeles. One of them is the Freeman House, currently on the market and awaiting restoration.

Built between 1923-25 for Samuel and Harriet Freeman, the residence stands wrapped in Mayan-inspired patterned concrete blocks above Franklin Avenue, taking in 270-degree views of Hollywood and the LA Basin.

After making a fortune from investing in a Downtown jewelry business, the Freemans devoted much of their money and time to architecture and the arts. Using their two-bedroom home as a “salon,” they entertained guests —including architect Richard Neutra, dancer and choreographer Martha Graham, photographer Edward Weston, the German painter and art collector Galka Scheyer, and Clark Gable (as a tenant) — who enjoyed the focal hearth, semi-open kitchen, various terraces and roof decks, and the main room framing city views through planes of glass supported by horizontal mullions, leading to mitered corners.

Curbed writes, “The story of those history-making windows, like everything else in the house, is more about the process than the final product. After Wright designed the home, he left it to his son, Lloyd Wright, to build it, as he’d moved on to other projects. Renovations to the house completed over the next few decades were executed by Rudolph Schindler, who worked alongside Wright on the Hollyhock House (where the Freemans met Wright when they were staying with arts patron Aline Barnsdall). These included carving the house into three separate living spaces after the Freemans’ marriage dissolved and the two began living essentially as roommates. Even the legendary windows are not original, but actually a re-creation by Wright’s protege, John Lautner, who added an aluminum support structure to replace the decaying wood.”

Similar to the other textile block homes Wright built — the famous Ennis House in Los Feliz, Storer House in the Hollywood Hills, and La Minatura in Pasadena — the Freeman house did not age well. Sand found on site was used to mix the concrete blocks. The sand reacted with the iron rebar, causing the rebar to rust and the concrete blocks to crater. “Without protective flashing on the roof—which Wright disapproved of, aesthetically—the blocks absorbed decades of rain like sponges, causing severe water damage and requiring a brigade of tarps and buckets at the slightest chance of drizzle.”

The home was considered structurally sound but in need of repair when Harriet Freeman gave the property to USC School of Architecture in 1984. A decade later, the Northridge earthquake hit causing structural damage, making the home uninhabitable.

Despite differing opinions surrounding the school’s care of the residence, funds were secured to rehabilitate the house; “Grants were received from the Getty Foundation, the Andy Warhol Foundation, and the Domino Foundation. A three phase rehabilitation plan was devised and the Phase 1 seismic stabilization work began in 2000. Over $1.5 million was invested in the initial phase which included the removal of vulnerable textile block and interior furnishings, structural stabilization, and basic system upgrades.”

But there’s more to be done to bring this architectural jewel back to its intended glory. The school has listed the residence for sale. The price of $4.250 million includes many of the original furnishings designed for the house.

Interested in seeing this home? Request a private showing.