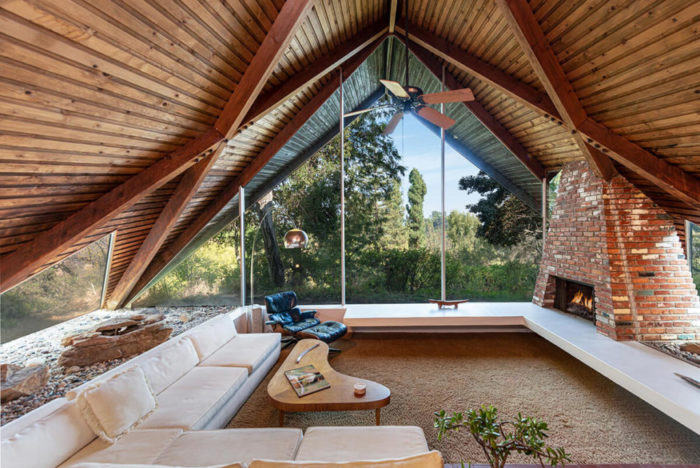 Now on the market for the first ever is the architectural vision of Harry Gesner known as the Stebel House.

The work of the self-taught surfer-architect who once turned down an apprenticeship alongside Frank Lloyd Wright is published in Houses of The Sundown Sea. The author describes Gesner as a maverick architect “designing homes inspired by his lifelong muse, the mythical landscape of Southern California, the land of the sundown sea.

“Throughout his career, Gesner was drawn to unusual and challenging sites—the kind that most architects turn down as impossible to develop—and tapped into a broad streak of invention and innovation that courses through himself and his houses.”

We see his brilliant creativity expressed in the mid-century boat houses that line steep hillsides in the Cahuenga Pass, his famous Wave House that reportedly inspired the Sydney Opera House, and of course this X-frame residence, built circa 1961 on an idyllic lot located at 1963 N Mandeville Canyon Rd.

Asking a tad under $2 million the home also comes with a guest apartment or flex space equipped with a bedroom, bathroom, kitchen, and office.