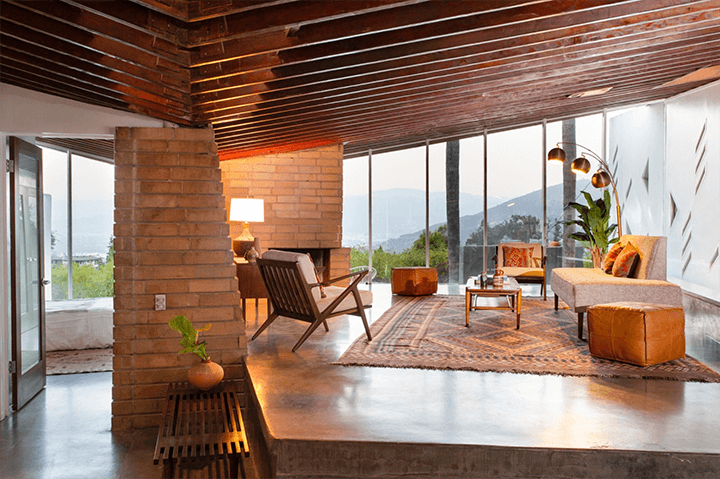 Included in John Lautner’s impressive contribution to modernist architecture in Los Angeles is the Bergren House that just hit the market in the Hollywood Hills.

Built in 1953 for guitarist Ted Bergren, 7316 Caverna Dr sits on a hillside parcel just north of Runyon Canyon off Mulholland Drive. (It stands near the architect’s famed Garcia and Chemosphere residences.)

While the footprint of the two-bedroom, two-bath home was left untouched after it was “rebuilt and expanded by the architect in the late 1950s after a fire,” the current owner says the interior had a “Miami Vice meets Barbarella” aesthetic.

The project included “a reconsideration of living spaces and bedroom areas. Interior spaces were reduced to an essential palette of white and wooden tones.”

After removing layers of paint from Lautner’s signature redwood ceiling beams, adding a “new kitchen with a poured-concrete island and high-end appliances, retreating the concrete floors, overhauling the bathrooms, and adding new lighting, landscaping, and a laundry room” the home looks more like Lautner intended.