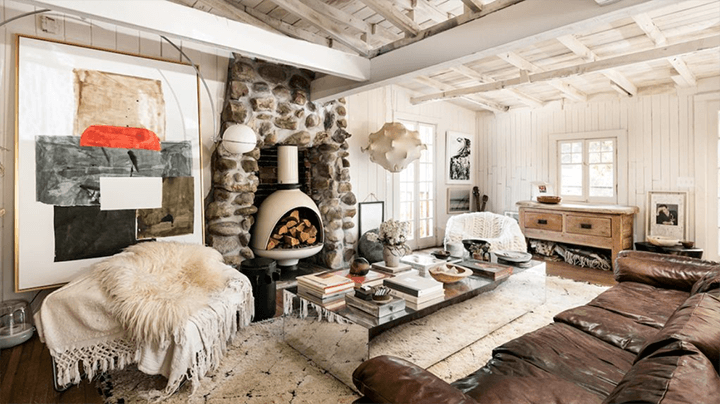 Leanne Ford, designer and co-host of HGTV’s ‘Restored by the Fords’, lists her Echo Park cabin. It’s rustic, modern, and ever so dreamy.

Built in 1911, 2317 Avon St is rumored to be the first house standing in Echo Park and was once owned by silent film star Clara Kimball Young. Ford spent a year and a half salvaging her two-bedroom, one-bath home that sits on 8,433 square feet of woodsy land, tucked behind a mature rubber tree.

Staying true to the architecture, Ford — a woman notoriously obsessed with the color white — anchors the interior by painting the entire 1,481 square feet of living space in Sherwin-Williams’s Shoji White; “In certain light, Shoji White looks like an aged book page. In direct sunlight, it’s as soft as a cloud.”

Exposed beams in the living room, splintery cabinets, stone floors, and exposed wood all add to the home’s rustic yet modern look and feel.

She says, “The reason this house is interesting is because we pull in all of these textures, down to the old sheepskin, down to the Mexican blanket and the knit throw.”

Features include a stone hearth surrounding a Midcentury Malm fireplace in the living room, french doors in the back that open to a beautiful stone patio, a kitchen equipped with a Smeg refrigerator and Viking stove, open shelving, and an old sink brought in from Pittsburgh. And the original tub was kept in the bathroom with new plumbing, made to look old.

Ford lives with her husband, Erik Allen, the co-founder and co-CEO of the menswear company Buck Mason. Their decision to sell came “After we found out about the sweet bun in the oven we realized this place is much more wine bottles than baby bottles style. So it’s time to pass it on!!”

The home dubbed #thelittlecabininthebigcity is represented by Diana Braun with a list price of $995,000.