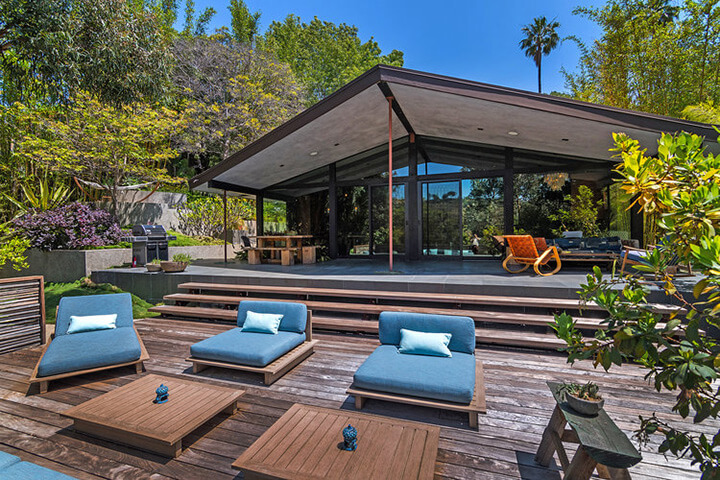 The former mid-century modern home of Grammy Award-winning singer/songwriter John Legend and model Chrissy Teigen is up for grabs in the Hollywood Hills. And guess what? It’s just as gorgeous as it was when they lived here.

Legend and Teigen’s former home is different than most. An Architectural Digest feature reported that when the couple lived here, they wanted it to reflect their “chic and tailored but earthy and casual” sensibility. To achieve this, they hired Don Stewart of the L.A. firm Desiderata Design.

Stewart created more privacy by building a new garage of “Cor-Ten–steel panels and a specially commissioned bronze entry gate etched with an Asian village scene. A sculptural stairway of concrete is smooth and rough finishes leads from the curb to the front landing, which is framed by a balustrade of white oak and steel.”

The interior was stripped down to the studs and reconfigured. Highlighted by beamed and vaulted ceilings, the public areas are now one open living/dining/kitchen space.

Features include basalt floor tiles, teak cabinetry, and stainless steel kitchen appliances. There’s a state-of-the-art recording studio. And a stone bathtub is located just outside one of the bathrooms.

This retreat-like setting is created with the shade of mature bamboo and agave, terraced gardens, and an in-ground wooden spa.