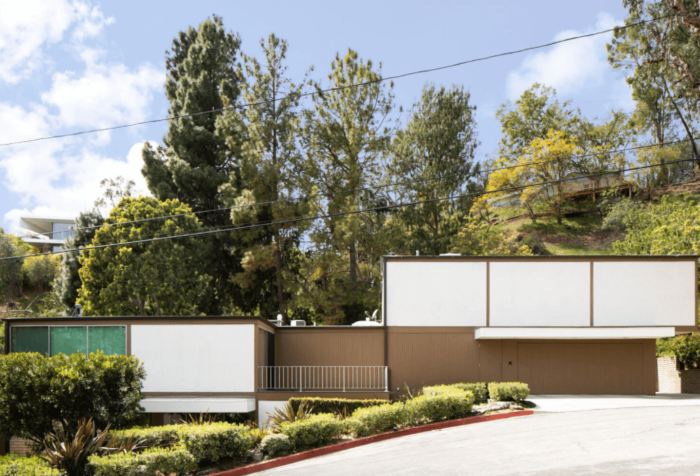 One of the last homes on a coveted mid-century enclave in Laurel Canyon happens to be one of the best.

Designed by architect David Crompton in 1962 for California artist Jean Edelstein, this striking mid-century house stands near the end of a cul-de-sac, just up from Pierre Koenig‘s Bailey House, Case Study House No.21.

With an entrance just below street level, the home opens to an interior defined by clean lines, organic forms, and minimal ornamentation. Floor-to-ceiling walls of sliding glass flank both sides of the residence, framing the garden designed by legendary landscape architect Garrett Eckbo who shaped the outdoors of the Millard Kaufman House and the Avenel Cooperative Housing Project.

A wall of brick surrounds the fireplace in the living room while the opposite side of the space holds a small dining table and a baby grand piano.

A u-shaped kitchen with wood cabinets offers built-in appliances and dining areas on both sides of its counters.

Measuring 3,948 square feet, the internal space holds four-bedrooms, multiple flexible-use rooms (one in use as a library/den with fireplace, another as an office), four bathrooms and an over 1,100 square foot attached studio addition with a separate entrance – currently in use as a world-class production design studio.

Neighborhood perks include hiking trails and the Mulholland Tennis Club, along with easy access to Studio City, Beverly Hills and Hollywood.