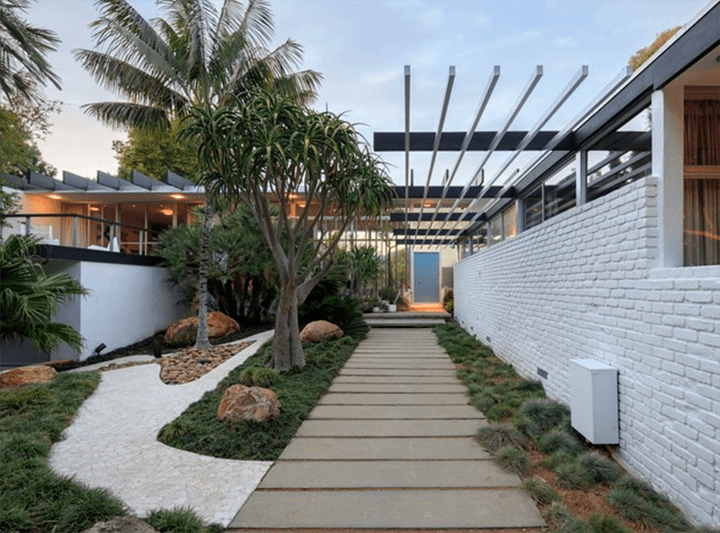 Brazilian modernist architect Oscar Niemeyer built only one residential home in the United States and did it all by snail mail.

Best known and applauded for his work on Brasília, “a sprawling new metropolis mapped around a governmental plaza that would become a beacon of modernist aesthetic ideals,” he was banned from the US for his leftist political associations.

According to Santa Monica Landmarks, Joseph and Anne Strick—a politically progressive couple in love with the architect’s work—hired Neimeyer. Anne said, “The choice of Niemeyer was not only an aesthetic one but, in part, a way of thumbing our noses at the whole McCarthy era because it seemed so reprehensible that a man, simply because of his political views, could be prevented from working in this country.”

The Stricks and Neimeyer never met. Nor did the architect ever step foot on the land. The design process happened entirely through a series of letters. Later, local architect Ulrich Plaut handled the working drawings, and “Anne Strick oversaw the completion of the residence with the collaboration of Interior Designer Amir Farr.”

Designed in 1963 to sit on an architecturally driven street with neighboring homes designed by Lloyd Wright and Paul R. Williams, 1911 La Mesa Drive is an expansive single-story residence erected on a 26,791-square-foot lot overlooking the Riviera Country Club and the Santa Monica Mountains.

Featuring a 14-foot-tall glass-walled living room, the 5,153 square feet of living space holds five bedrooms and six bathrooms in a T-shape floor plan. Architectural Digest says, “The glassy, indoor-outdoor pavilion, with a flat roof suspended by an exoskeletal superstructure, was part of a very sensible floor plan that harbored a swimming pool in an outdoor room at the rear.”

Still owned by Michael and Gabrielle Boyd, modernist house collectors who saved the Strick House from being razed, the International-style dwelling is listed for rent by Aaron Kirman, asking $55,000 per month.