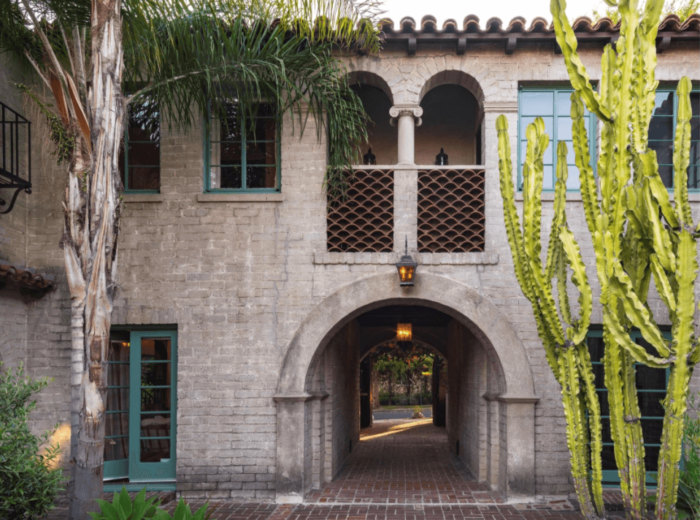 El Cabrillo is one of eight courtyard developments designed in the 1920s by husband-and-wife team Arthur and Nina Zwebell, who perfected the romantic Spanish Colonial Revival.

Built in 1927, the 10-unit, two-story apartment building was commissioned by Cecil B. Demille to house out-of-state actors. Throughout the years, members of the Hollywood scene, including actress Anna May Wong, director Lowell Sherman, and the cross-dresser actor Divine, called El Cabrillo home.

The building was crowned a Historic-Cultural Monument in 2003. Two years later, it was listed in the National Register of Historic Places.

In 2006, Xorin Balbes, a collector of trophy architecture and high-end home flipper, completed an extensive (but sensitive) restoration resulting in the complex being converted to condominiums. With many restored and original detail, the complex was a go-to location for shooting the pilot of the television series Chuck and is featured in Netflix’s new “Hollywood” series.

According to the book “Courtyard Housing in Los Angeles,” the Zwebells used concrete blocks to create the building’s adobe-like exterior. Inside, the residence opens to the Zwebells signature two-story living room and mezzanine. Thick plaster walls, beam ceilings, hardwood floors, lunette-style windows, and wrought iron grace the interior that opens to a central courtyard with gardens and a striking Moorish fountain.

The residence located at 1832 Grace Ave also has its own private patio, basement, and deeded garage parking space, along with Mills Act tax benefits significantly reducing your property taxes. Last sold in 2020 for $1.262 million, the condo is now listed, asking $1.475 million, with monthly HOA fees of $573.

Interested in seeing this home? Request a private showing.