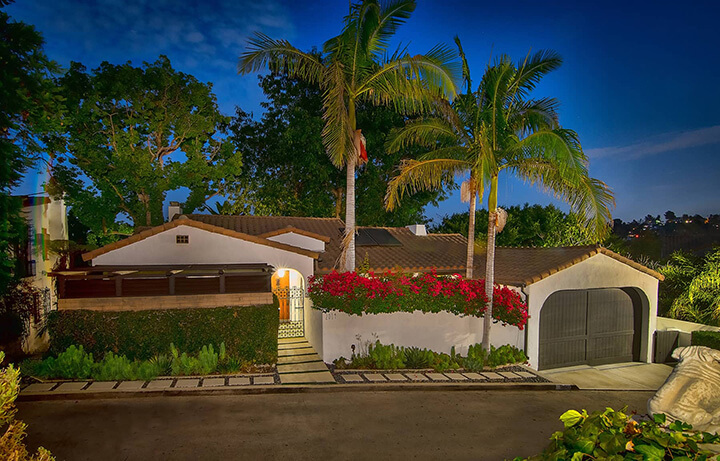 Kesling began his career as a carpenter and moved up the architecture ranks to eventually work alongside Rudolf Schindler as a draftsman. By the mid-1930s he opened his own office, Kesling Modern Structures.

His most notable residences in Los Angeles include the Skinner House, the Wilson House, and two homes in and near West Hollywood for Wallace Beery. (One of which is considered the crown jewel of Streamline Moderne architecture.)

Departing from his signature style, Kesling designed this 1929 Mediterranean home that has been meticulously modernized and renovated without losing an ounce of its character.

Features include views of the reservoir, a private front courtyard, a foyer with an intricate, hand-painted, Art Deco ceiling, a grand living room with high-beamed ceilings, a huge fireplace and enormous windows, an office/library, and a re-done kitchen by John M. Sofio of Built Inc.

The primary bedroom suite has a spacious walk-in closet and French doors leading out to a private courtyard/patio that makes for a perfect spot for slowly sipping your morning latte while scrolling through Instagram.

There are three other bedrooms, one functioning as an inviting hangout room/den with a cozy fireplace and a beautiful walnut built-in.

And while you’ll probably end up spending more time at home than you ever imagined you’re  just a block away from the reservoir and a short distance from Botanica (my new favorite.)

And yes, you’re in the Ivanhoe Elementary School district.