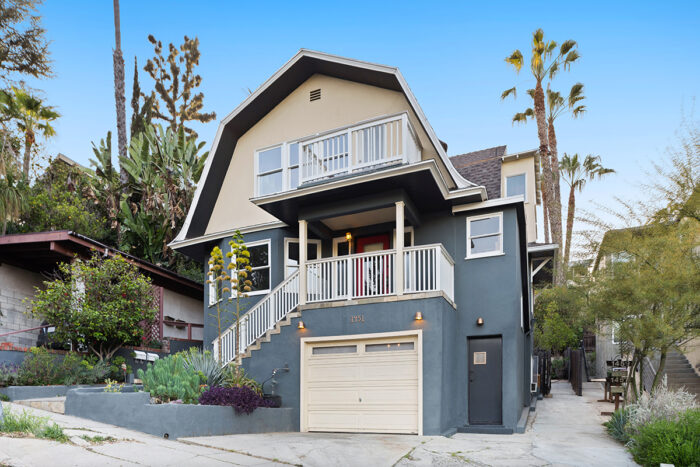 Tom Jermann and Toby Yoo, the husband-and-wife graphic design team behind T42 Design, rented their striking Dutch Colonial home for five years before purchasing it directly from the owner. Here, they reflect on how their home evolved, affording them room to enjoy a few dogs, their daughter, and work from their modest studio, where they designed album covers for some of the best rock bands of all time.

Tom: “We were living over on Doheny, and we decided we wanted to move to Silver Lake because a lot of our friends lived on the Eastside. I saw this listing in the LA Times that sounded too good to be true with the price of $1,800 or something. I kept calling for a few weeks, but nobody picked up. It actually had the address in the ad, which was unusual.

“I came to your house for the World Cup Soccer Final. Because I had the address, after the game, I came over here and, of course peeked inside and was like, ‘wow.’ I kept calling that week again, and finally this English guy picked up. It was Tony Hudson, Slash’s dad from Guns & Roses. We arranged to meet and hit it off right away.”

The two-story residence is located on 1451 Westerly Terrace, a stroll away from Silver Lake Blvd’s hub of go-to restaurants, the dog park, Silver Lake Reservoir, and Silver Lake Meadow. Tom also likes to note; there are four golf courses within a few minutes from the house.

Originally built as a duplex, at some point in the mid-1930s, the home was moved from West Adams to Silver Lake by Kress Engineering Company, a company owned by George Kress that moved thousands of houses and commercial buildings in Los Angeles. The interior was later reconfigured, turning two units into a two-story, single-family dwelling with a studio.

Aesthetically, the two-bedroom, two-bathroom home leans on its Dutch Colonial roots but feels modern in use and nature. The couple spent years updating the systems and tweaking the interior to suit their needs.

Toby: “We bought the house in 2003, right after we got married. And then we started a crazy cycle of working like hell on the house and then going on vacation. And in between, we had parties out here. It was pretty crazy what we actually lived through.”

Toby: “The nice thing about our house is that it’s open but has defined spaces. It has the morning light; it’s always nice in the mornings. In the summers, the intense sun goes away in the late afternoon, so you get a little shade and you get to enjoy your backyard. With the windows in the front and the French doors in the back, you get really nice airflow.

“It’s been a great house to raise a child with that backyard. I would have to say I think we’ve been in this house so long because it was able to evolve with us.”

When they moved in, they also established their own design and branding studio, “combining classical design training and the very latest technology to create compelling designs for music packaging and books, web and print design, and merchandising work on album packaging, marketing, and promotional materials, and websites.”

Before their daughter arrived, they used the east-facing bedroom as their office. Then they moved the office downstairs but found it soon took over their living space. Instead of renting a fancy office on 3rd Street, they decided to renovate the studio that’s located at street level and has a separate entrance and a three-quarter bathroom.

Tom: “One of my first jobs after graduating from Art Center was at MCA Records, which then became Universal Music Group. When I left MCA, we started T42 Design. I told the creative director to think of us when he wanted to farm out work. He started giving us projects.”

Tom: “It’s funny, in this modest space downstairs, there were a lot of big projects created that a lot of people around the world have seen.

Toby: “The house has so much more potential to evolve with the next owners. We always envisioned doing a nice outdoor kitchen, but, of course, the bar came first. And all that upper space, I hope the next owners do something with it. If we stayed here longer, we would’ve loved to build one of those prefab structures.