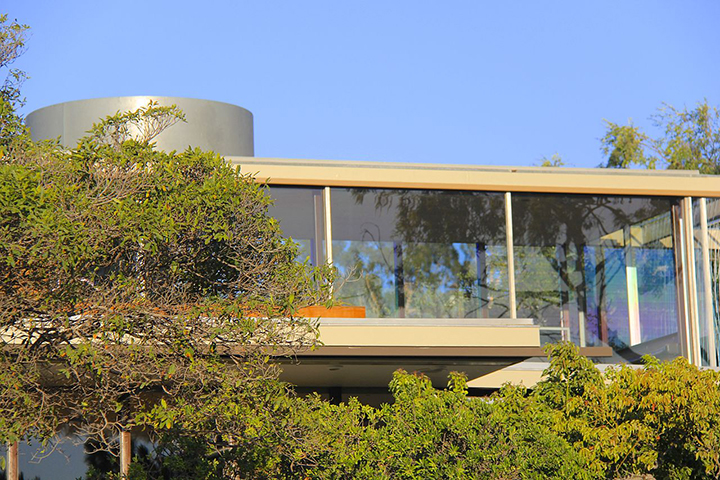 END_OF_DOCUMENT_TOKEN_TO_BE_REPLACED

Los Angeles offers some of the most iconic mid century modern architecture in the world.

The exhibition showcased the work of architects who embraced simplicity with their design and integration with nature. A few of the buildings featured were the Bauhaus School by Walter Gropius, Villa Savoye by Le Corbusier, Tugendhat House by Ludwig Mies van der Rohe, Kiefhoek housing by J.J.P. Oud, Lovell House by Richard Neutra, and McGraw-Hill building by Raymond Hood.

What was most remarkable for visitors that day was how these architects used materials like steel and reinforced concrete to create uninterrupted interior spaces, and simple geometric shapes. It was something new in residential construction and showcased key design elements that define modernist architecture:

Open floor plan: Unlike Craftsman, Spanish or Victorian style homes the interior spaces offer open floor plans. The living room and, dining room are usually combined with the kitchen opening up to one or both of those rooms.

Large windows: Floor-to-ceiling windows and sliding glass doors are popular features that allow for interior spaces to be filled with tons of natural light and provides views of exterior spaces.

Indoor-outdoor living: open floor plans and the use of large panes of glass windows and doors help to blur the lines between interior and exterior spaces and unify the structure with nature.

Minimalistic: ornament is crime; no mouldings or anything fussy.

This new residential style became the buzz in housing.

The most memorable collection of modern homes in Los Angeles are the Case Study Houses.

The Case Study House program developed as the result of “endless discussions in the comfortably shabby editorial offices of Arts & Architecture where during WWII John Entenza (editor in chief) and a number of relatively young architectural guns would talk about new ideas in residential design and construction.”

The goal of the project was to design residential dwellings that were simple, stylish, replicable, and affordable for the housing boom caused by millions of returning soldiers.

The program ran from 1945 to 1966. Out of the 36 architectural designs submitted 28 homes were built in Los Angeles along with Case Study Apartments #1, a multi-family building in Phoenix, Arizona. 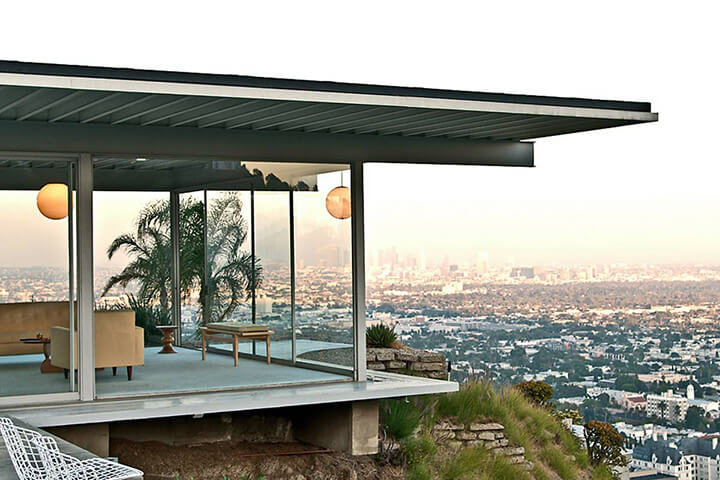 Clarence “Buck” Stahl and his wife, Carlotta Gates, may have built the most iconic and internationally recognized home ever.

“No one famous ever lived in it, nor was it the site of a Hollywood scandal or constructed for a wealthy owner. It was just the Stahls’ dream home. And it almost did not come true” Curbed reports.

The couple spent nearly four years paying off their seller financed mortgage loan and Buck, by hand, prepared the lot for construction. But when it came time to build they were told it was impossible.

Architect after architect (including Craig Ellwood) turned the project down. And then they met Pierre Koenig. In the 1989 documentary The Case Study House Program, 1945-1966: An Anecdotal History & Commentary, Pierre Koenig recalled how Buck “wanted a 270-degree panorama view unobstructed by any exterior wall or sheer wall or anything at all, and I could do it.”

Exposed glass, steel, and concrete were used to build a home that effortlessly connects the house with the land and Los Angeles’ cityscape.

Shortly after completion famed architectural photographer, Julius Shulman, captured the most recognized image of this home. Years later the home was declared a Historic-Cultural landmark and later listed on the National Register of Historic Places. 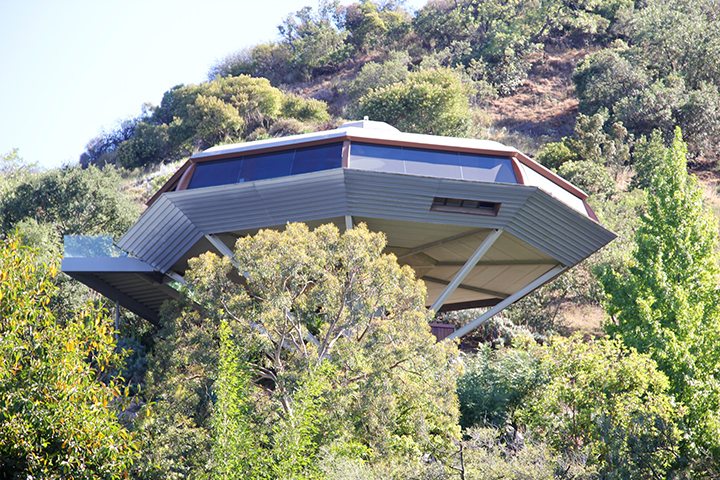 With the help of John Lautner, aerospace engineer, Leonard Malin, built the most remarkable structure in Los Angeles.

Lautner, a protégé of Frank Lloyd Wright, understood the importance of Organic Architecture. Instead of competing with the 45 degree hillside he arrived at a unique solution. He designed what LA Conservancy describes as,  “An octagon perched atop a twenty-nine-foot high, five-foot-wide concrete column like a flying saucer on a stick ….”

It cost $140,000 to see the project to completion. Malin came in with $80,000. A NY Times feature notes the rest was bartered. Malin said ”I traded six months of the house being shown by the gas company in exchange for things like tile that went through the whole house,’’ and “Chem Seal provided the experimental epoxies, coatings and resins to put the house together and inspired the name Chemosphere. (Lautner originally wanted to call the house Chapiteau.)”

Malin and his family enjoyed many years riding the funicular up to this spectacular example of modernist architecture offering panoramic views of the San Fernando Valley.

In the late 90s then couple Angelika and Benedikt Taschen, of the German publishing house Taschen purchased the home for $1 million. They hired architects Frank Escher and Ravi GuneWardena to return Chemosphere back to its original glory. They spent two years restoring the home. “The restoration team removed layers of paint, paneled the walls with the same shade of ash wood used for the original built-in couches and cabinets (some of which needed repair or restoration), and replaced the fixed-paneled windows with frameless glass.”

For the Taschens a home like this is “… the responsibility of the owner to preserve it for future generations because a house like this doesn’t belong to one or two people: It belongs to mankind.”

This was the home of Richard Neutra and his family was made possible via a loan from a very wealthy Dutch client, Cees H. Van der Leeuw, who also happened to be an industrialist and architecture aficionado.

After completing the Lovell Health House in Los Feliz, Neutra was determine to prove good design and affordable housing are possible. He built his own home with this in mind. Sited on a  lot in Silver Lake his personal glass house with rooftop and balcony gardens overlooking the Reservoir is a great example of what is possible for the less affluent.

Now owned and maintained by Cal Poly Pomona College of Environmental Design, the home continues to be an architectural head turner. 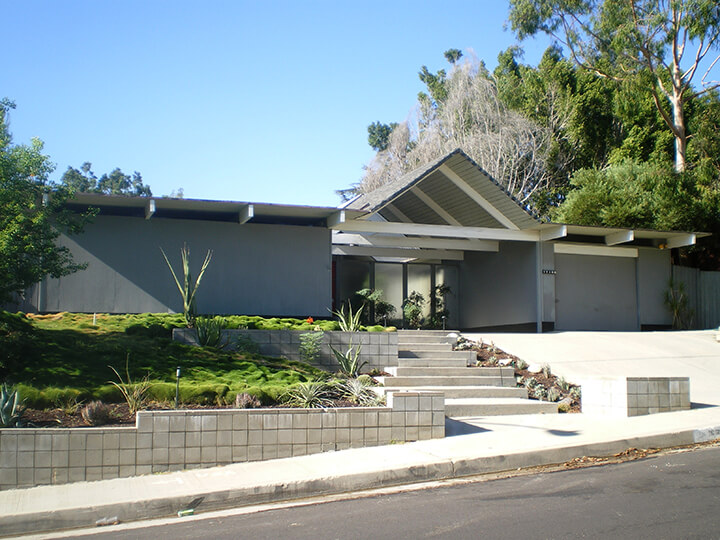 Joseph Eichler had a thing for modern architecture but it wasn’t until he was evicted from living life under the roof of the legendary Frank Lloyd Wright-designed Bazett House did he think of becoming a real estate developer. He ended up building a home for himself and 11,000, happy to be living in a modern, homeowners.

Eichler sought the best architects in the business to design his homes. The first prototype was designed by Robert Anshen of Anshen & Allen. He later worked with the San Francisco firm Claude Oakland & Associates, the Los Angeles firms of Jones & Emmons, A. Quincy Jones, and Raphael Soriano.

Built using post and beam construction, his collection of homes capture the essence of midcentury modern style and are often referred to as California Modern. Features include flat or low sloping A-frame roofs, high ceilings with light flooding the interior via floor-to-ceiling walls of glass and skylights, open floor plans, and the ever enviable indoor-outdoor flow that brings the outside in.

With its resort style weather and vast availability of relatively cheap land, Palm Springs became the perfect destination for modernism too.

Modernist fans have the opportunity to tour many of the iconic homes during Modernism Week. It’s a yearly event that boasts about being the “the ultimate celebration of midcentury architecture, design and culture.” 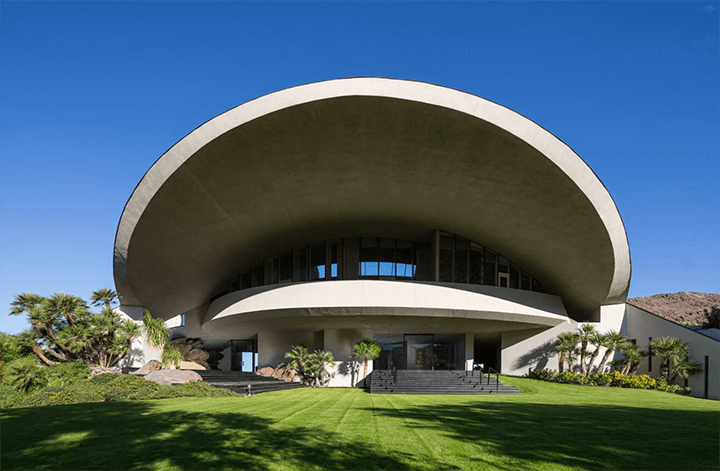 Described by Deezeen as “a massive volcano-esque structure complete with a crater-like hole in the roof” this sprawling 6 bedrooms, 10 bathrooms, 3 half baths, indoor and outdoor pools, a pond, putting greens and a tennis court home hit the market in 2013 with a whopping asking price of $50 million. With one price reduction it sold two years later for $13 million. 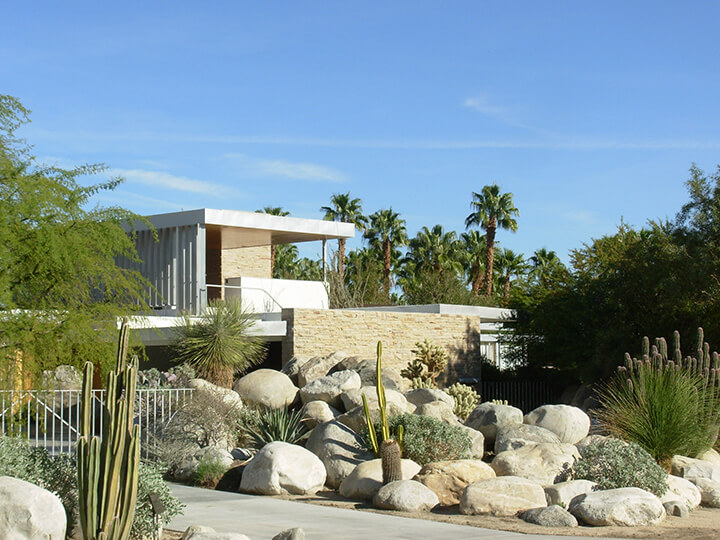 This home is truly a work of art.

For the first time ever the auction house Christie’s placed architecture among art to be auctioned. They described the residence as, “… the purest realization of Neutra’s Modernist ideals: its organic spaces and floor-to-ceiling sliding glass walls seamlessly connecting man and nature, the inside and outside worlds. The house remains singular as the most important example of mid-century modernist architecture in the Americas to remain in private hands.”

This five bedroom, five bath home was originally built in 1946 as a vacation retreat for Edgar J. Kaufmann, Sr., a Pittsburgh department store tycoon. After his death in 1955 the home stood vacant. A stint of celebrity owners, including crooner Barry Manilow, performed a series of unfortunate renovations. Then in couple Brent Harris, an investment manager, and Beth Edwards Harris, an architectural historian purchased the home in 1993 and hired Marmol Radziner to restore it.

To this day it remains one of the most important examples of International Style architecture in the United States.

While many of the famed architects of the modernist era are not around today they left a lasting impression. Just take a look at real estate developer, Elan Mordoch, who recently completed a small lot development called Habitat 6 in Los Feliz. Or check out Barbara Bestor who restored not one but two Lautners. The first was a long lost Lautner known as the Jules Salkin residence in Echo Park and the other is the famed architect’s masterpiece known as Silver Top. And of course, Marmol Radziner, the design-build firm who has restored countless midcentury classics designed by the great architects of the era, along with proving a prefab is nothing short of fabulous in Desert Hot Springs, CA.

Find a modern home of your own by visiting mid-century modern architecture for sale in Los Angeles.