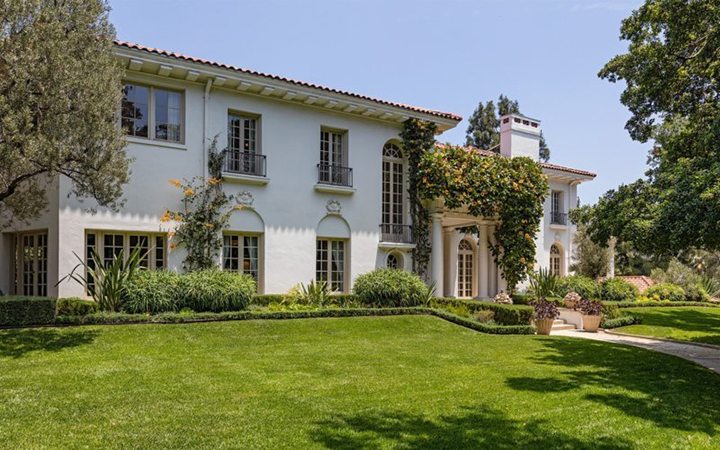 If you’ve ever wondered what old Hollywood glamour feels like, take a walk through Cecil B. DeMille’s estate in Los Feliz’s gated Laughlin Park.

SaveDeMille was a famous Hollywood director who is remembered most for his epic and extravagant films; The King of Kings, Samson, Deliah, and The Ten Commandments.

He wrote in his autobiography, “Since I came to California in 1913, I have never lived anywhere but Hollywood.” When the development of Laughlin Park began, he purchased one of the first homes built there. (Charlie Chaplin purchased the other.)Save

DeMille lived in his estate for over four decades. It’s sited on 2.1 acres and consists of a Beaux-Arts-style mansion, a pool house, and a studio.

The current owners, an architecture-loving couple with a keen interest in restoration projects, enlisted the help of architecture firm Tichenor & Thorp to restore and add to the DeMille estate.

They spent six years bringing this six-bedroom, ten-bath house back to its former glory. Ceilings were raised where possible, and servant’s quarters were replaced with a larger kitchen and library. Retained original details, like Doric columns in the living room, were retained along with molded ceilings and an old-school prohibition-era style wine cellar.

The once upon a time breezeway extending from an atrium that connected the estate to Charlie Chaplin’s former residence was removed but the atrium remains.

And the sprawling, idyllic, grounds are straight out of your most beautiful dreams – pool with arched fountains, incredible gardens, paths, and sitting areas, and a dead-on view of the Griffith Observatory included.

The one and only historic Cecil B. DeMille estate is exactly what you expect old Hollywood architecture to feel like – grand.