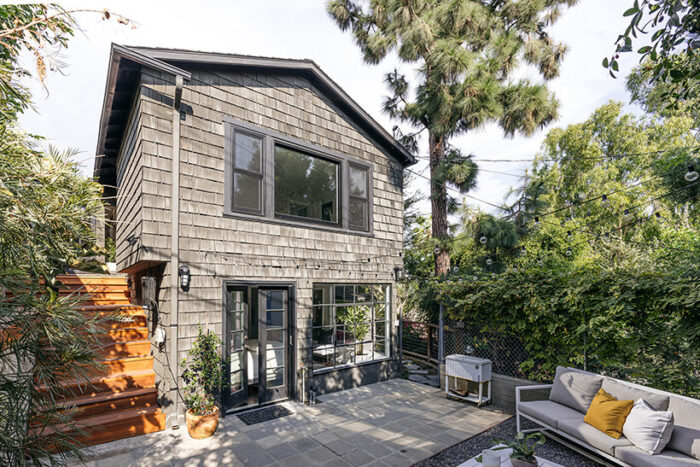 Loma Vista Place is one of Silver Lake’s hidden treasures. It’s a historic stair street dating back to the early 1900s when LA was “well-served by trolleys, streetcars, buses, and light-rail systems.”

Lined with bungalows of a bygone era, the street crosses Glendale Blvd to Allesandro Way, offering residents an enchanting hidden enclave in the city. In 2018 Rachel Hollcraft, an event producer/designer for Hollywood after parties, and Sam Brandl, who works in television, purchased a two-story bungalow sited one flight up from Allesandro Way.

The couple shares their life on this historic street as their home hits the market.

Loma Vista Place is one of the stair streets featured in the book “Stairway Walks in Los Angeles.” While traversing this street, co-author Larry Gordan says, “The further I got into it, it was like, ‘Look at this place!’ It’s among the most isolated–and, in its own way, very romantic.”

Like Gordan, Rachel and Sam felt the same energy.

Rachel: “It was the energy when we walked in; it has a really special energy that we’d never felt before. You can tell it’s a home that people loved.”

Sam: “It’s one of the streets that makes LA special. There aren’t that many cities with stair streets that you can live on, and this is one of them. It feels like you’re in a special part of LA … there is something exciting about it.”

Hidden from passers-by, the bungalow sits behind a tall fence. The shingle-clad structure is positioned to capture surrounding hillside views. Inside, the home opens to a dining area that flows to an open living room and kitchen.

The dwelling’s most striking features are the windows, particularly the ones positioned behind a spiral staircase, framing the morning sunlight and capturing the glow of LA’s magical sunsets.

Rachel: “I see the sun rising over the yard through the windows behind the spiral staircase. I take so many photos there during magic hour too. The other day I was trying to get a picture of Ezra with the light behind him, and it was just so beautiful.”

Windows of both bedrooms frame the green scenery of the lush outdoors with the primary bedroom with an ensuite bathroom opening to the rear yard.

Beyond the walls of their grounds is a tight-knit community of stair street residents.

Rachel: There’s a certain special friendliness about the step-stair dweller community. The Loma Vista stairs is a tight-knit group that watches out for each other. We do different events with the stairs; We sometimes walk over to The Red Lion with everyone. We do ‘Scare on the Stairs’ every year, a Halloween tradition for the kids who live on the stairs. We make cocktails. Our neighbor below did an incredible Christmas extravaganza and set up times for us to come over. It’s a community that looks out for each other and welcomes everybody.”

Sam: “It’s like an HOA without the fees and only the good parts. It’s a very positive community.”