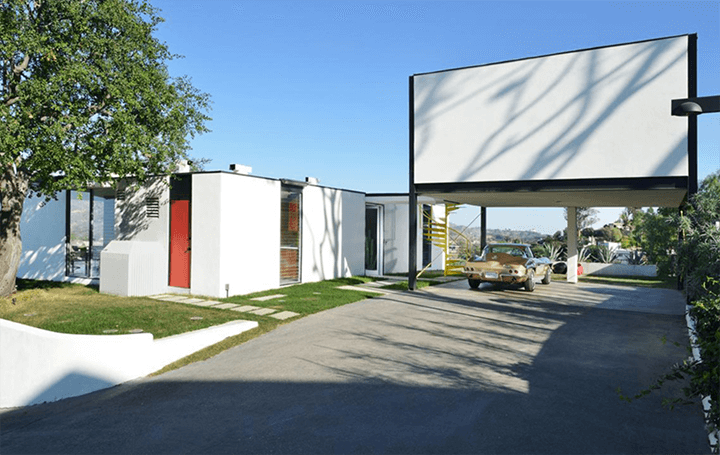 Completed in 1956, the two-bedroom, two-bath home with a guest house sits on a gated and private 12,741 square-foot lot with a pool and unobstructed city views. But when this former gem hit the market earlier this year, it was begging for architectural mercy.

Philippe Naouri of Maison D’Artiste purchased the home with restoration in mind. “I’ve lived in midcentury homes my entire life” and describes Casa Kuderna as “an architectural piece to live in just the right size … you cannot get a better house.”

To help restore 2977 Passmore Dr, archivist Barton Jahncke of Parti Charette assisted with images from the archives of Jim Tyler—the architect who worked with Craig Ellwood on the original house and who recently restored the Smith House.

Naouri’s stayed true to his intent to “restore and upgrade with nicer materials.” Walking through the house, you see everything from the yellow hue on the exterior spiral stairs to the original windows and wood were restored to a ’T.’ The original floor-to-ceiling jalousie windows, brick and steel fireplace, and walls of glass throughout are still in place. Terrazzo floors were added, and the overhangs and screens installed initially to eliminate the sunlight were removed. Jahncke exclaims, “the structure that you are seeing now really is as close to the original structure you will ever see again.”

Michael Alpert of Converso, a furniture dealer known for rare finds and essential pieces by design icons, staged the interior with classics like a restored George Nelson sectional with swivel arms.

Naouri and his talented team deserve a standing ovation for bringing this architectural gem back to life.