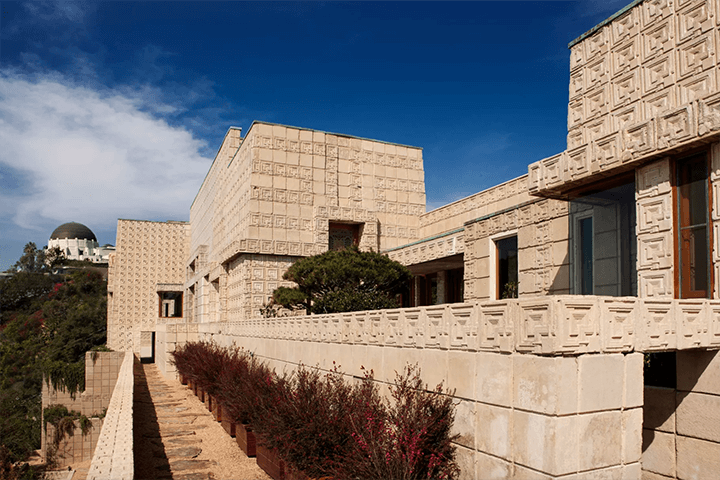 Wright used decorative textile concrete blocks, a material he once called “… the cheapest (and ugliest) thing in the building world,” to create a handful of architecturally stunning homes, including the Hollyhock House located in Barnsdall Art Park, La Miniature, the Freeman House, and the Storer House. (His son, Lloyd Wright, used similar-looking concrete blocks for the Sowden House.)

Built in 1924 on a half-acre land, the Ennis House – offering three bedrooms, three-and-half-baths, plus a guest house – was made with 27,000 concrete blocks. Located at 2655 Glendower Ave, it is the largest, and last home Wright designed using textile blocks.

Ironically, the most eye-catching feature of the dwelling wasn’t that durable and, along with damage resulting from the Northridge earthquake of ’94 and the winter rains of 2004/2005, contributed to the temple-like residence needing costly repairs.

After completing an initial restoration that helped stabilize the home, the Ennis Foundation decided it was best to put the Los Angeles landmark on the market. “ We’ve made a lot of progress, but at this point, a private owner with the right vision and sufficient resources can better preserve the house than we can as a small nonprofit.”

Billionaire Ron Burkle was up for the challenge and spent a rumored $17 million completing the restoration.

A Los Angeles landmark listed on the National Register of Historic Places, the Ennis House is asking $23 million.