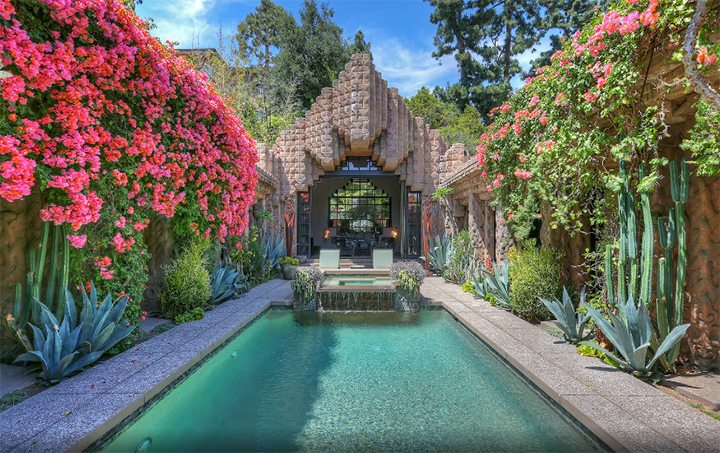 If the walls of Lloyd Wright’s Sowden House could talk, they’d thank Xorin Balbes for saving them and possibly solve a famous murder mystery.

SaveDesigned and built for artist John Sowden and his wife on a 14,000-square-foot lot on Franklin Avenue. The Sowdens were “artsy Hollywood folks who liked to party, and Lloyd Wright, who had spent a year designing sets for Paramount Studios, indulged their desire for the theatrical.”

While the home is hailed as Wright’s most significant work and has even earned Los Angeles Historic-Cultural Monument status, it is rumored to have disturbing skeletons in the closet.

In 1945, Dr. George Hodel purchased this architectural treasure and lived in the home with his family for many years. Like the Sowden’s, he enjoyed the glamorous life and threw over-the-top parties fueled by sex and drugs.

After his death, Hodel’s son, a retired LAPD detective, implicated his father in the famous unsolved murder mystery of Elizabeth Short, aka the Black Dahlia. His son believed his father was a sadistic murderer and tortured and mutilated this dark-haired beauty in the basement.

Scary, right? But not for some.

An architecturally significant home, in need of a makeover, with a sordid mysterious past, was what high-end house flipper Xorin Balbes was looking for. He purchased the home in 2001 for $1,200,000 and spent close to $1.6 million restoring and remodeling the space to create a modern-day sanctuary.

In restoring the Sowden house, Balbes honored Lloyd Wright’s intention to merge architecture, space, and landscape. Xorin restored the stonework. He reduced the bedroom count to four, and the bathrooms were updated. Xorin also combined rooms to accommodate a large eat-in kitchen and added a pool and spa to the central courtyard.

After spending a decade living in this Wright-designed residence Balbes put his home on the market in 2011. After several months and a price reduction, he sold it for $3,850,000. Its been on and off the market since 2013 and is longing for a new owner.