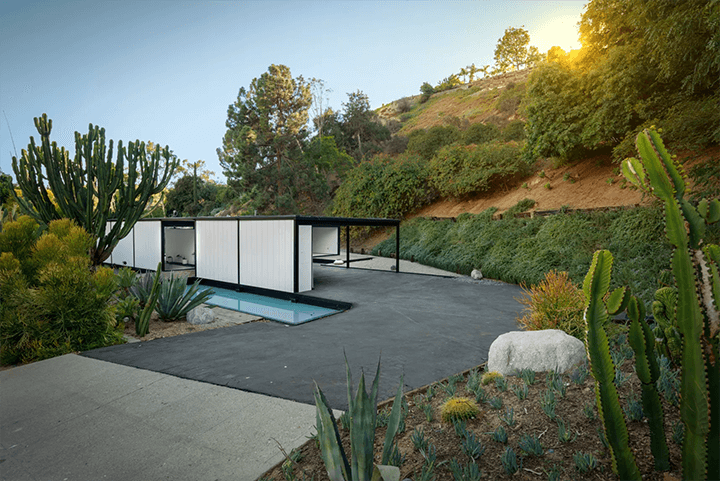 One of the few remaining homes of Arts & Architecture magazine’s Case Study House program returns to the market with a new asking price.

While Pierre Koenig is world famous for the Stahl House, the Bailey House, also known as Case Study House No.21, may be less well known but is no less admired.

Completed in 1959, the steel and glass residence located at 9038 Wonderland Park Ave in Laurel Canyon is positioned on a north/south axis on a 12,450-square-foot lot allowing the house to “trap the sun’s warmth in the winter and screen it out in the summer.”

A success visually as well as functionally, the 1,280-square-foot home holds two bedrooms, two baths and features innovative steel paneled walls at the front and back, providing privacy from the street below and the hillside houses above and walls of glass on either side opening to the landscaped yard with shallow reflective pools.

After a series of unfortunate interior modifications, Koenig was invited back in the 1990s to oversee the restoration of the property earning the City of Los Angeles Historic Preservation 2000 Award of Excellence. “As a result, Case Study House #21 survives as a beautiful and sadly rare example of steel-framed residential architecture in a graceful Mid-Century Modern style.”

We last saw the Bailey House on the market two years ago with a whopping asking price of $4.5 million. It’s now back and listed with Edward Reilly & Aaron Kirman for $3.6 million.