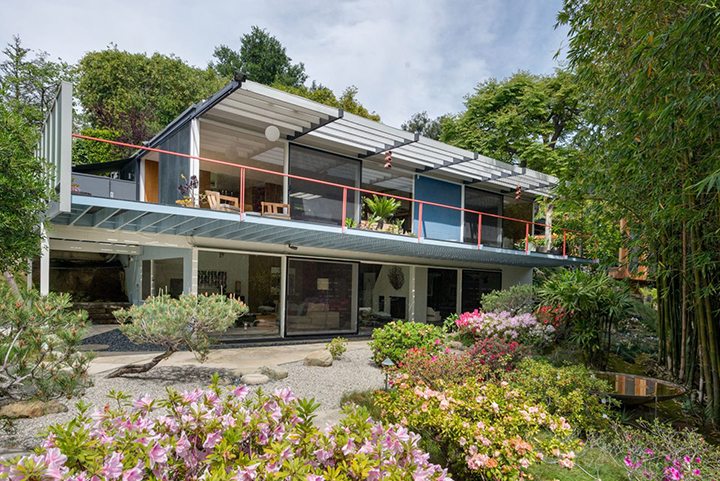 I’m convinced the conservative nuclear arms strategists, Albert and Roberta Wohlstetter, hired their liberal architect friend, Josef Van der Kar, for one reason and one reason only— to blow you away.

In an issue of Modernism magazine, Van de Kar is described as, “… well known for his political activism as he was for his architecture … he worked with some of the leading architectural revolutionaries such as Buckminster Fuller, Rudolph Schindler, and Richard Neutra … and in the 1940s he collaborated with his close friend and fellow leftist Gregory Ain.”

Surprisingly, his most notable clients were uber conservatives. “The Wohlstetters commissioned their house from Van de Kar after Albert served as vice president of Bauhaus founder Walter Gropius’s General Panel Corporation in the 1940s …”Save

Once equipped with a hot-line connected directly to the Oval Office this International Style home is set down a gated drive far from noisy neighbors and prying eyes. To add even more privacy, landscape architect, Garrett Eckbo, strategically added bamboo that have fully matured into a lush blanket of greenery to the grounds.

The living areas on both levels provide extra-wide sliding doors to gardens, terraces, and courtyards. Movable panels open the kitchen to the main living/dining room.

The newer guest-house overlooks the giant Koi pond and sleeping porch and has a bath and extra-large closet. Sculptural benches, lounge areas, and modern ramada dot the grounds. And the giant bamboo shades the sunny pool area.

Whether you agree with the Wohlstetters’ foreign policy, hiring Van de Kar to create a true retreat was a strategic move that generations later still blows you away.