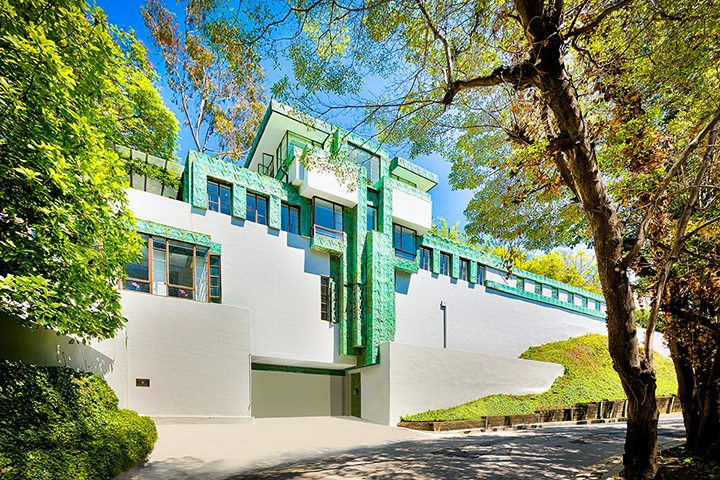 True story. He was embezzling money and got caught. As repayment, hands over the keys to this landmark home designed by a famed architect.

Reports say, “In 1930, Novarro discovered Samuel had been embezzling from him. Not only was Samuel using the money to play the stock market (not a great move in the fall of 1929), but he was also using his client’s money to pay the mortgage on his Los Feliz home. Now, Novarro wasn’t the type of guy who needed the press digging around in his private affairs, so he quietly opted not to press charges. However, he did take over ownership of the Wright house.”

Some say this may be the most beautifully sited home in Los Angeles. Built on a 13,000 plus hillside lot, the exterior is Mayan-inspired, sporting smooth stucco with eye-catching oxidized copper accents.

The home was initially built as a one-bedroom with a living room, dining room, kitchen, and lounge leading you to the swimming pool. When Novarro retrieved ownership, he hired Wright to expand the home by adding a  pergola, a music room, and a bedroom suite.

Throughout the years, the home continued to be a celebrity magnet. In the 1940’s composer Leonard Bernstein, director Jerome Robbins, and the comedy duo Betty Comden and Adolph Green rented it.

In the 90s actress Diane Keaton rehabbed the space with the help of architect Josh Schweitzer. Keaton later sold it to actress Christina Ricci who lived in the home for a year. This home last sold in 2014 for $3,800,000. It will be interesting to see if it keeps its “Celebrity Owned” status this time around.