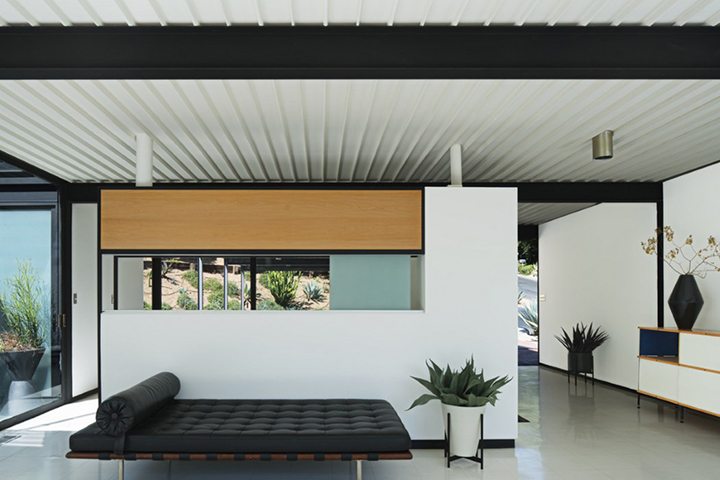 END_OF_DOCUMENT_TOKEN_TO_BE_REPLACED

Mid century modern is more than just a home designed by Richard Neutra or any of the other great modernist architects.

The term describes a design aesthetic produced during the mid 20th century that’s rooted in simplicity and spans a style of architecture, interior design, décor, furniture, and graphic design.

Walter Gropius is often credited for giving birth to the mid century modern movement. In 1919 Weimar, Germany, he opened Bauhaus, a German art school. His goal was, “to create a new guild of craftsmen, without the class distinctions which raise an arrogant barrier between craftsman and artist.”

Students learned the principles of architecture, sculpture, and painting with crafts and engineering. According to metmuseum.org the preliminary courses were taught by visual artists like Paul Klee, Vasily Kandinsky, and Josef Albers and included the study of materials, color theory, and formal relationships.

From there, students moved on to specialized studies in metalworking, cabinetmaking, weaving, pottery, typography, and wall painting.

What developed was a school that “churned out so many pioneering architects and designers that it fleshed out an entire artistic movement.”

With the help of Gropius, and designers and architects like Marcel Breuer and Ludwig Mies van der Rohe, the swanky style of this era became popular in the United States with an unrivaled collection of architectural work located in Los Angeles, California.

The City of Los Angeles is applauded for its collection of mid century modern architecture. Here are the architects and a list of their most recognized residences and commercial buildings:

Despite dropping out of the University of Southern California School of Architecture program, Gregory Ain‘s career as a modernist architect flourished. He was influenced by Schindler and Neutra. According to NC Modernist, “He lived in Neutra’s then-new VDL Research House for a while and worked for Neutra from 1930 to 1935 … Ain’s second wife, Josephine Cohen, later married Robert Chuey and had Neutra design them a house.” Ain is best known for designing modern homes for the working class with flexible floor plans and open kitchens.

Charles and Ray Eames are the husband and wife team adored for their groundbreaking designs in architecture, furniture, industrial and graphic design, fine art and film. In a video promoting Pacific Standard Time: Art in LA 1945-1980, Ice Cube tours the Eames’ landmark residence built as their personal home and studio. Before rap music, Cube studied architectural drafting and admires Eames’ ability to plan and build the frame of their home in just two days.

In addition to their home and study they’re fondly remembered for the Eames Lounge Chair.

Paul Williams was the first certified African-American architect west of the Mississippi. His strategic use of sweeping entry staircases or an oversized fireplace to create dramatic interiors earned him the reputation among the Hollywood elite as the go-to architect. His celebrity client list included Frank Sinatra, Lucille Ball and Desi Arnaz, Lon Chaney, Barbara Stanwyck and Charles Correll. And while he is mainly known for character homes dripping with detail his architectural prowess covered midcentury, Tudor-revival, French Chateau, Regency, French Country, and Mediterranean architecture.

Did you know Craig Ellwood, the man who designed three Case Study Houses, was not a licensed architect? (… but he did take night courses in structural engineering at UCLA extension.) His ability to blend the formalism of Mies van der Rohe with the informal style of California modernism places him among history’s greatest American architects of the modernist era.

A. Quincy Jones was a modernist architect and a architecture professor at the University of Southern California.  During his 42 year career he focused on “better living” for the growing middle class. Jones’ name is stamped on over 5,000 built projects that Hammer reports still exist today. His homes and buildings are celebrated for, “expansive interior spaces, thoughtful and efficient building layouts, and a reverence for the outdoors.”

John Lautner maybe the most daring architect of the modernist era. From the Elrod House used in the James Bond classic “Diamonds are Forever,” to Chemosphere, and the Foster Carling House, Lautner used innovative designs to tackle and do what others never dreamt of. On the rare occasion a Lautner home hits the market, a flurry of interest is generated almost immediately and often followed by a real estate bidding war. For example, Silvertop, also known as the Reiner-Burchill Residence, sold for $8.55M, (that’s 14% over the asking price) to Luke Wood, the president of Beats By Dre, in a fierce bidding war.

The Scandinavian design movement centers around simplicity, minimalism and functionality. And everything from glassware, lighting, and furniture took on a whole new look. Today the reproduction of these interior pieces still exist. IKEA is by far the most recognized name to bring beautiful and functional everyday objects to the masses.

Marimekko is a Finnish home furnishings, textiles, and fashion company based in Helsinki with a flagship store in Beverly Hills, CA. Modernica continues to produce the Case Study Fiberglass Chairs that was originally designed in 1948 as an entry in The Museum of Modern Art’s International Design Competition.

Find your own mid-century modern home and architecture for sale in Los Angeles.