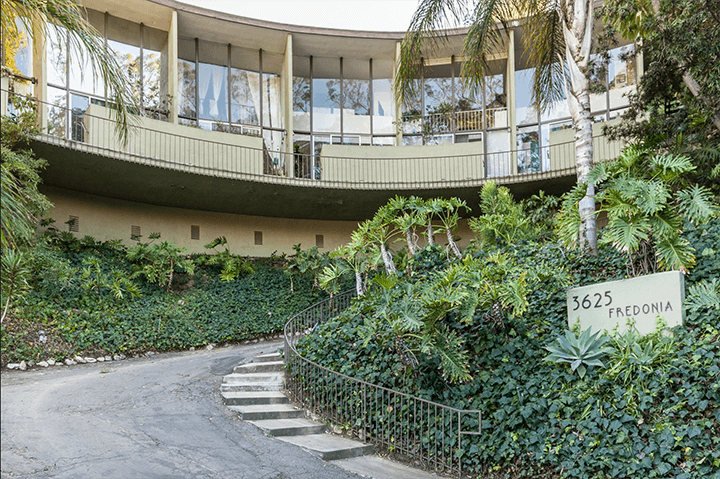 It’s rare a unit at the Ray Kappe-designed Fredonia Apartments comes on the market. When one does it’s your chance to own an architectural condo gem-like nothing else in Los Angeles.

Among his awarded and published work said to be “an extension of the early Southern California master architects: Wright, Schindler, Neutra, and Harwell Hamilton Harris,” Kappe built this 12-unit complex in 1963.

Known for his innovative designs, Kappe purposely departs from the flat exterior, and facades typical in most condo buildings. Instead, each home flows in a unique curved pattern giving the building a striking street presence.

While the interior finishes may look more like the late 90s/early 2000s than mid-century modern, core architectural details like the tall ceilings, floor-to-ceiling glass, and abundant natural light are left intact.

An indoor-outdoor connection happens in front, with a spacious balcony nestled amongst the trees, offering spectacular city views. There’s a private patio opening onto a sparkling, kidney-shaped pool in the back.

Listing courtesy of William Baker & Brian Linder of Deasy Penner, this well-maintained building also has the bonus of being centrally located; it’s south of the Boulevard in the Cahuenga Pass, close to major Hollywood attractions, Studio City, Universal City, and a short bicycle ride to the Hollywood Bowl.